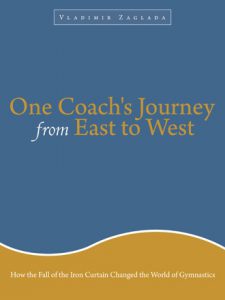 ONE COACH’S JOURNEY FROM EAST TO WEST: HOW THE FALL OF THE IRON CURTAIN CHANGED THE WORLD OF GYMNASTICS

During the heyday of Soviet gymnastics, Vladimir Zaglada coached Olympic gymnasts at the famous Moscow-Dynamo gymnastics school (he was head coach of this club for 20 years) and other elite training facilities. Like many of his colleagues, after the fall of the Soviet Union he was forced to leave his native Russia and seek employment abroad.

“One Coach’s Journey from East to West: How the Fall of the Iron Curtain Changed the World of Gymnastics” is intertwines his own life story with his thoughts on the theory and practice of gymnastics.

The flood of coaches into the States and western Europe who were trained in the Eastern bloc has certainly benefited Western gymnastics, but he and many of his colleagues, not to mention the thousands of gymnasts trained by them and their parents and fans, are aware of a certain cultural and linguistic communication gap between this influx of coaching talent and their American pupils and audiences. There is a Russian saying: “may the hand that gives prosper.

” Vladimir Zaglada have always lived by the principle that it is better to give than to receive. This is why, in offering the American reader a window into the world of gymnastics, he had tried share his life experience and his professional abilities and skills not just as a resource to provide insight into methodology, but as a practical guide to working with gymnasts at any level.

Up to now, no book has attempted to do what his book does.

* Explain the Soviet system for training coaches and gymnasts, including in-depth explanations of some of the pedagogical approaches used;

* Open a window onto the academic research into the practice of artistic gymnastics that was conducted within Soviet sports, including my own;

* Use a question and answer format to address a number of practical issues surrounding the teaching of artistic gymnastics; Although there is a great deal of technical information in the book that will be primarily of interest to other coaches, the owners of gymnastics schools, gymnasts and their parents, it also contains stories from the world of gymnastics that will be of interest to any fan, particularly those intrigued by the international aspect of Olympic sports.

The main source of information for gymnasts, parents, and coaches is currently the magazine International Gymnastics. “One Coach’s Journey…” discusses many of the famous figures from the world of gymnastics readers of this publication will be familiar with, but provides biographical and technical information that will be new for them. For example, the book includes a special profile of gymnastics World Champion Olga Mostepanova (Russia), now the mother of 5 young children.

It also takes the reader inside the Moscow-Dynamo Gymnastics Club, which produced many other champions beside Olga.

It is just a few informative excerpts from the book illuminating on unknown facts about Dynamo Specialized Group (“spetsgroup”), up and downs of the Russian Gymnastics and real achievements some of the American researcher-pioneers of the Profile System: […] Dynamo’s Olympic Reserve Group was a unique prototype of a sports boarding school where everything was self-contained and meticulously conceived. […] Today everyone agrees that the Dynamo spetsgroup was established as an alternative to the year-round training of gymnasts that took place at the Ozero Krugloye training facility, which was under centralized control. […] I consider Gary Goodson’s work to introduce profile exercises in America to be of titanic importance.

These types of exercises are not simply well-known as components of a gymnast’s basic preparation, but are part of an entire training system called the “Profile System.” Today, these types of exercises may be better known in the United States than they are in contemporary Russia. […] I believe that my country, Russia, which has been so influential in gymnastics for more than 50 years, will learn lessons from its recent defeats and return to the ranks of the leaders of international gymnastics.

GYMMY THE OWL AND HIS FRIENDS : TALES IN RHYME ABOUT THE ANIMAL  KINGDOM’S NATURAL GYMNASTS

The Author House published  English & Russian versions of the book. Both versions are available as a Regular Paperback Books  and E-Books. I just giving the opportunity for the visitors of my website to see an original Russian Ebook written by me within one attempt. All I can add to already published book is the small Afterwords from me and Gymmy written right now …

Eight years have passed since the publication of the funny and fascinating adventures of little Gymmy the Owl and his Friends from The Animal Kingdom.

During this time, an event occurred in my life and in the life of my little Hero, gymnastic instructor Owlet Gymmy, that radically altered my life …

This club has become a home for me. The friendly and creative atmosphere of which has allowed me and my little Gymmy to fully reveal our abilities, and to establish not just an ordinary gymnastic school, but also a kind of the University of Gymnastics Art.

Then just a couple years later, I became the happiest ever Granddaddy in the World!

My little Gymmy will fly high, inviting as many as possible of the little lovers of Artistic Gymnastics to our amazing BIO Gymnastics University. 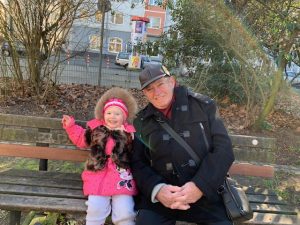 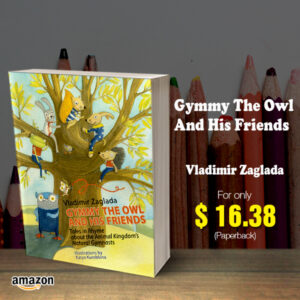